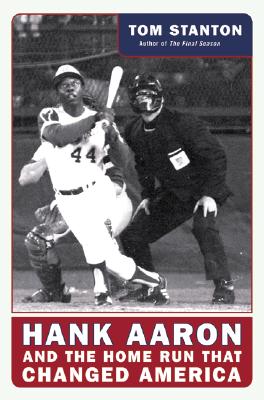 Hank Aaron and the Home Run That Changed America

Baseball has witnessed more than 125,000 major-league home runs. Many have altered the outcomes of games, and some, swatted into the stands on dramatic last swings, have decided pennants and won reputations. But no home run has played a more significant role in influencing American society than Hank Aaron's 715th.

Aaron's historic blast -- and the yearlong quest leading up to it -- not only shook baseball but the world at large. It exposed prejudice, energized a flagging civil rights movement, inspired a generation of children, and also called forth the dark demons that haunted Aaron's every step and turned what should have been a joyous pursuit into a hellish nightmare. In Hank Aaron and the Home Run That Changed America, Tom Stanton, author of the prize-winning The Final Season, penetrates the burnished myth of Aaron's chase and uncovers the compelling story behind the most consequential athletic achievement of the past fifty years.

The tale takes place during tumultuous times, the years of 1973 and 1974, as the Watergate scandal unfolds and the Vietnam War sputters to an end. It's the era of Ali and Archie Bunker, of Wounded Knee and Patty Hearst, of Roe v. Wade and Billie Jean King versus Bobby Riggs, of oil shortages, and of a nation struggling with deep divisions. At the center of the social storm stands a private, dignified man -- Hank Aaron -- who rises to accept the mantle of his recently deceased idol, Jackie Robinson, and becomes emboldened by the purpose of his mission: to break the record of sport's greatest legend, Babe Ruth, not only for himself but for the advancement of all African Americans and for the good of his country.

Along the way, Aaron endures bigots, zealous fans, hate mail, FBI investigations, bodyguards, the ambivalence of his adopted hometown, a batting slump unlike any other, the sniping comments of Babe Ruth's widow, the slights of baseball's commissioner, a string of controversies, and constant threats to his and his children's lives. The story features a rich cast of characters: a friend and sometime rival, Willie Mays, who must come to terms with the end of his own career; Aaron's hard-as-iron protector, manager Eddie Mathews; a young, self-assured, occasionally cocky protege, Dusty Baker; a future president, Jimmy Carter; a preacher of rising prominence, the Reverend Jesse Jackson; stars like Willie Stargell and Tom Seaver; and a roster of equally colorful, lesser-known peers.

But at the heart of the narrative is Hank Aaron, a class player who refused to preen at home plate or strut shamelessly around the bases even as he reached the pinnacle of the national pastime. Three decades later, Tom Stanton brings to life on these pages the elusive spirit of an American hero.

Title: Hank Aaron and the Home Run That Changed America

Hank Aaron and the Home Run That Changed America