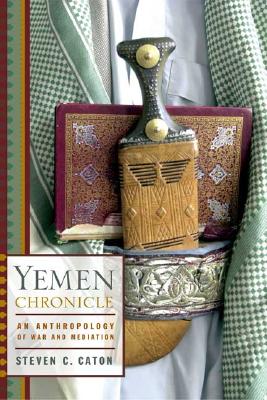 Yemen Chronicle: An Anthropology of War and Mediation

A report like no other from the heart of the Arab Middle East
In 1979, Steven C. Caton went to a remote area of Yemen to do fieldwork on the famous oral poetry of its tribes. The recent hostage crisis in Iran made life perilous for a young American in the Middle East; worse, he was soon embroiled in a dangerous local conflict. "Yemen Chronicle" is Caton's touchingly candid acount of the extraordinary events that ensued.
One day a neighboring sheikh came angrily to the sanctuary village where Caton lived, claiming that a man there had abducted his daughter and another girl. This was cause for war, and even though the culprit was captured and mediation efforts launched, tribal hostilities simmered for months. A man who was helping to resolve the dispute befriended Caton, showing him how the poems recited by the belligerents were connected to larger Arab conflicts and giving him refuge when the sanctuary was attacked. Then, unexpectedly, Caton himself was arrested and jailed for being an American spy.
It was 2001 before Caton could return toYemen to untangle the story of why he had been imprisoned and what had happened to the missing girls. Placing his contradictory experiences in their full context, "Yemen Chronicle" is not only an invaluable assessment of classical ethnographic procedures but also a profound meditation on the political, cultural, and sexual components of modern Arab culture.

Title: Yemen Chronicle: An Anthropology of War and Mediation

Yemen Chronicle: An Anthropology of War and Mediation