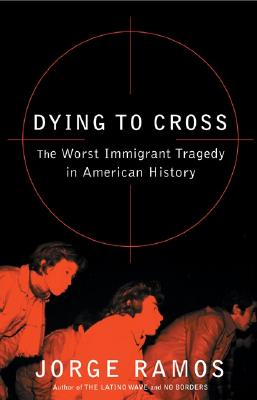 Dying to Cross: The Worst Immigrant Tragedy in American History

From esteemed journalist Jorge Ramos, in what is indicative of the strained and even desperate times in which we live, comes a tragic story about the death of nineteen people, the final hours of their incredible ordeal, and the network of individuals (and countries) who profit from what is considered by many nothing less than modern-day slavery.

According to the latest reports, approximately three thousand people a day are caught attempting to cross the borders of the United States. Yet for every three thousand caught, hundreds actually do make it across and begin what they think will be a better life than the one left behind in their homelands.

The risks are immense for these individuals: the dangers lurking behind every decision made, every shady deal agreed upon, lead many toward the edge of mortality. Many fall off this edge and are later found dead -- an unmarked, unidentified corpse in a country where their dreams will never be realized, and, worse, their bodies never even identified.

On the hot and humid evening of May 13, 2003, at least seventy-three people boarded a tightly sealed trailer truck in what they hoped to be the final leg of an intricate journey toward their dream of living and working within the United States. The trailer they were riding in was to take them from Harlingen, Texas, to Houston, about three hundred miles away. The trailer never made it passed Victoria, Texas, a place that would become the site of the single worst immigrant tragedy in U.S. history.

With the passion and insightful analysis that characterizes his work, Emmy Award-winning journalist Jorge Ramos recounts the events of this chilling tragedy, as he tries to understand how something so inhumane can happen in the twenty-first century. Through interviews with survivors who had the courage to share their stories and conversations with the victims' families, and in examining the political implications of the incident on both U.S. and Mexican immigration policies, Jorge Ramos tells the story of one of the most heartbreaking episodes of our nation's history.

Dying to Cross: The Worst Immigrant Tragedy in American History